Is Surrogacy in BC legal?

Maybe one of the most surrogacy friendly Canadian provinces is British Columbia where a written legal arrangement must be signed before conception. This agreement describes rights and obligations between the surrogate and IP’s, it will state what happens before, during and after pregnancy, it can even include details such as surrogate’s diet, behavior, travel limitations, financial aid, etc.

The Family Law Act, in section 29, sets the rules for the surrogacy agreement and the intended parent’s rights after birth and is based on the presumption that IP’s are the parents while the surrogate is not the biological mother. The surrogacy agreement must specify that the potential surrogate will be the birth mother of the conceived child or children, and after birth, the surrogate will not be the parent, instead the intended parent or parents will be the child’s parent or parents.

The requirements for the surrogacy agreement to be valid in BC include: no party should withdraw from the agreement prior to the child being conceived, surrogate needs to give written consent after birth and the IP’s need to take the child into their care. 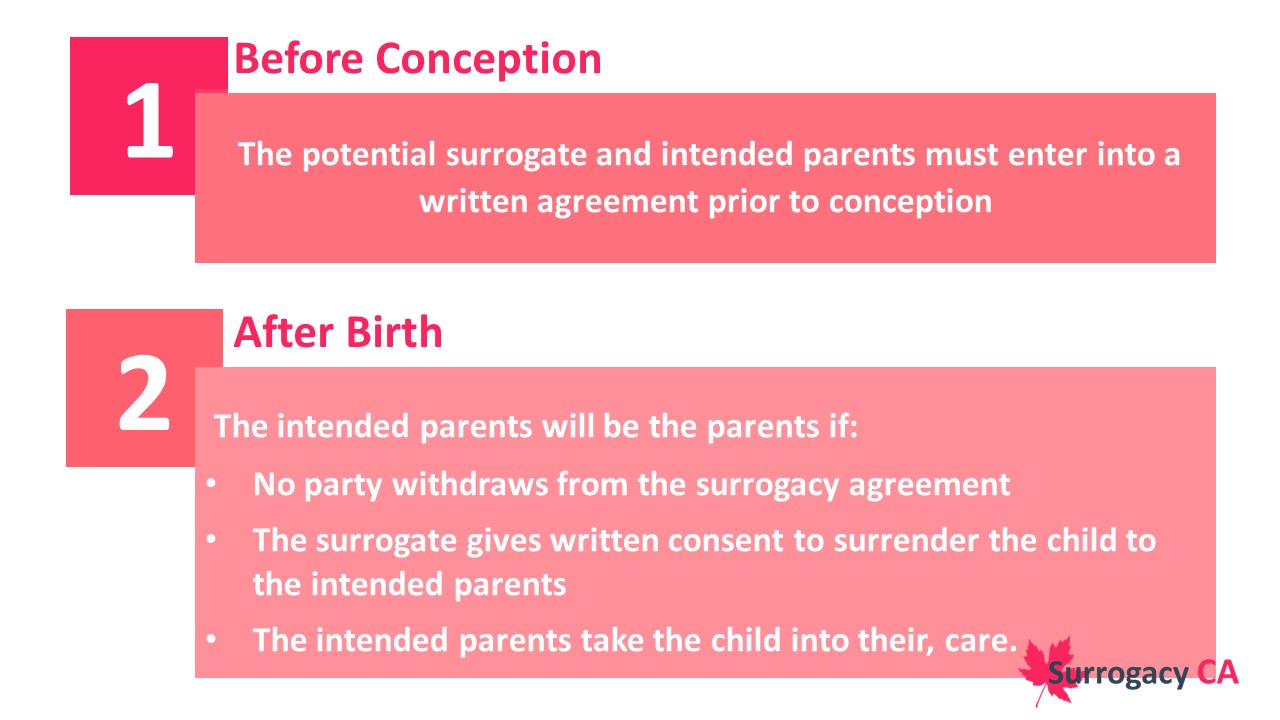 Who can enter a surrogacy agreement in BC?

A straight or gay couple not able to conceive or get pregnant, a transsexual man or woman, a single man or woman and a woman wishing to be a surrogate.

Below you can find some other distinctive characteristics of surrogacy in British Columbia:

Although declarations of parentage may not be necessary for British Columbia purposes, they are required by the law in foreign jurisdictions. For example, Quebec will not recognize the presumptive registration under the Family Law Act, and therefore, a declaratory order is required. Unless a declaration is required, no court appearance is necessary to obtain the birth registration pursuant to the scheme in the Family Law Act.

Surrogacy in British Columbia is completely legal option and very well accepted option for different types of intended parents including straight ad same sex couples, single straight/ gay/ trans people who are not able to start their own family and they want to find surrogate mother in British Columbia to achieve their dream.

Don’t forget that if you wish to enter a surrogacy agreement in British Columbia it is highly recommended to seek support from a surrogacy lawyer in order to make sure all legal requirements are met.